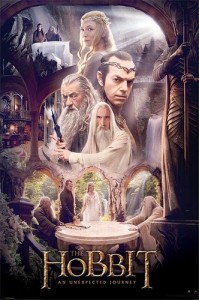 Goblins, Dragons, and Trolls – Oh My!

This December, many wonderful things will be happening. My son Timmy will turn 10 years old, two days later my daughter Maggie will turn 12. As a church, we will be celebrating the birth of our Savior with our annual banquet, our Christmas Eve service, and the carol singing in Sunday morning worship – all of which are highlights of my year. My family and I will also, for the first time ever, be going on a Christmas trip – we will leave on Christmas morning to spend a week with my brother and his family in Denver, Colorado. But this year, December will bring something else as well.

On December 12, 2012, “The Hobbit” will be showing in a theater near you. Literature, and the arts in general, are often not given a lot of air time in Christian circles unless they are explicitly Christian. This is, I think, in many respects unfortunate. Although there is definitely literature and art to be avoided, it is also the case that even the worst of the worst cannot escape the meta-narrative of the universe – the grand story that God has written into the very fabric of our nature and imagination. The word I like to use to describe this is the Hebrew word olam – a word meaning eternity, perfection, or completion. The word olam describes the intuitive way in which each of us feels things should be good forever. And, as Ecclesiastes 3:11 puts it, God “has set olam in the hearts of men.”

Consider how it is that a storyline, whether in a song, book, or movie, actually moves us. All of us have some idea how the story ‘should’ end – and the story always moves us in relation to how it ends relative to the way we innately know it ‘should’ end. Thus we have genres like “tragedy” or films described as “tearjerkers.” And these categories appear to be supra-cultural! A movie with a sad ending is universally held to have a sad ending. When the credits rolled after the first screening of Princess Bride, there was not a fifty-fifty split between those who thought the movie was happy or sad. And when that movie was showed in Eastern Europe it was still a ‘happy’ movie. In this we observe the powerful, ‘gravitic’ pull of grace (according to my spell-checker I just coined a new word!). Despite the story characters’ failures and tension in the subplot, we want what is good and just for our characters and are moved by the ending in relation to how that ending either conforms to or fails to conform to our spontaneous or ‘innate’ desires for the goodness and justice we want the main characters to experience.

Here is where goblins, dragons, and trolls come in. In various parts of The Hobbit, these are the “lions, tigers, and bears” that pose great difficulties to the party of intrepid treasure seekers whose story is told. In each encounter, we hope for and in fact anticipate the victory or escape of the “good guys” despite great odds against dreadful opponents. Art imitating life! We too face goblins, dragons, and trolls in different guises – and we too long to defeat and escape them. This is the pervasive echo of the redemptive storyline of the universe – the “yearning of all creation” described in Romans 8:22. We find that it and it alone accounts for the power of the imagination and the effect of story on our minds and hearts. We want the story to end right.

Will you be watching The Hobbit this month? If so, listen for those echoes. And be encouraged to know that the goal of our adventures is not a mere dragon hoard and our hero is not a diminutive Hobbit! Rather, we have a heavenly inheritance and the Lord of Glory himself.

“April showers bring May flowers.” When I was growing up in Maryland, this little bit…