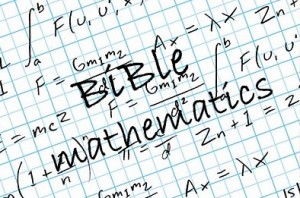 This month as we watch our kids returning to school and perhaps are beginning classes ourselves, let’s consider some good old fashioned arithmetic! There are three passages in the New Testament in which the Apostle Paul tells us “what counts.” These passages bear a remarkable similarity to one another:

“For in Christ Jesus neither circumcision nor uncircumcision has any value. The only thing that counts is faith expressing itself through love.” Galatians 5:6

“Neither circumcision nor uncircumcision means anything; what counts is a new creation.” Galatians 6:15

In these three passages, Paul is talking about the exact same thing. He is saying, on the one hand, that neither circumcision nor uncircumcision means anything. He says this in three different ways: whether or not one is circumcised in outward conformity to the form of the old covenant, is (1) nothing, (2) has no value, and (3) doesn’t mean anything. Paul has found three different ways to express the single idea that if we want to pursue life with God through formal, ritual obedience, we have missed the point of the gospel. He writes in Galatians 5 doing so would make “Christ of no value to you at all.”

But consider the other half of this equation.

What interests me more than the parallel statements about the worthlessness of circumcision and uncircumcision is the way Paul finds three different ways to state “what counts.” If he had only said that what counts is keeping God’s commands, I might be a legalist. If he had only said that what counts is faith expressing itself through love I might be a libertarian, or an antinomian (someone who is against the law). If he had just said a new creation is what counts I might be some kind of extreme pietist who simply chose to “let go and let God” since he does the Creating – I am just along for the ride.

But instead the whole testimony of scripture says that this “one thing that counts” can be described – fact must be described, in these three terms. To put it another way, if one of these three things is not present, neither are the other two. For example, faith expressing itself through love cannot truly break God’s commands. And you cannot genuinely keep God’s commands with an unbelieving heart or bitterness towards others. When one is truly present, so are the other two. In mathematic terms:

Too rarely, I think, do we think about these things this way. The thing that counts in expressing our life with God is shaped and defined by these three things: (1) a moral standard – God’s commands, (2) an affective motive – our faith “proving” itself through out love for God and others, and (3) a humble dependence – we know that it is God who is at work in us.

The school year has begun! I hope that you will join me in taking this lesson to heart. Do we fall into a rut of thinking about what counts in only one or two of these terms? Do we find ourselves frustrated and discouraged by our constant failures, our cold obedience, or the prevailing of old patterns in our life? Let’s commit ourselves to prayerfully pursuing this great thing that counts: keeping God’s commands as our faith expresses itself lovingly because we are in fact new creations.