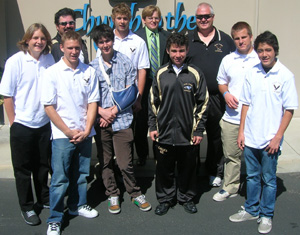 Bob Bjerkaas grew up in a Christian home in Columbia, Maryland where he came to faith in Christ during his middle school years.  While studying music at the University of Maryland, Bob sensed a call to the gospel ministry, switched his major to history, and began what would prove to be a ten year involvement in youth ministry.  Upon completion of his Bachelors degree, Bob earned his M.Div. at Chesapeake Theological Seminary in Linthicum, Maryland in 1998. A year later he was ordained by the PCA when he was called to pastor a church he had been serving as a stated student supply in St Albans, Vermont.  He served that church as its pastor for seven years, during which he time he completed a Th.M. in Reformation Studies at Reformed Theological Seminary in Orlando, Florida.  After a sabbatical, he accepted the call to pastor Church in the Canyon and began his work among us in the Fall of 2007.

Bob met his wife Kerrie in church at the age of five!  They were married in 1997 and have four children: Christopher, Margaret, Timothy, and Nathaniel.  Bob and Kerrie enjoy family time very much.  Bob is often found playing with his kids at home or taking “adventure walks” with them along Medea Creek near their house.  Music, lacrosse (See photo—Bob coaches at Oak Park High School), reading, writing, and fishing are among his other interests.

Listen to a personal interview with Pastor Bob