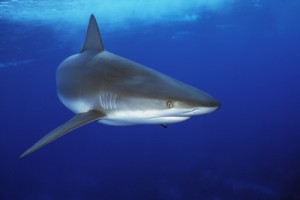 Proverbs 6:6 is easy to remember:

“Go the ant, you sluggard; consider its ways and be wise.”

I love this verse for a lot of reasons.  Not least because this verse invites us to consider the wisdom of God as it is displayed in creation – and the invitation to draw moral examples from God’s good creation.  Isn’t it mind-boggling that human beings – image bearers of the Creator who are just a little lower than the angels (Psalm 8:5) – should learn wisdom from such an apparently insignificant creature as an ant?  And we are invited in God’s word to learn from a number of such creatures.  In the book of Proverbs alone, we can benefit from considering rock badgers, locusts, lizards, dogs, mules, horses, goats, sheep, lions, vipers, eagles, and even leeches!

Sharks don’t make that list.  But I have learned from them too.  Sharks, you see, are almost always moving forward with their mouths open.  The manner in which their Creator designed their gills requires water to move through and over the gill surface in order for oxygen to be extracted from the water.  Their gills don’t “flap” like the small fish species in our aquariums.  Sharks can’t move water through their gills; they need to move their gills through water.

“press on to take hold of that for which Christ Jesus has taken hold of [us].”  Again, he writes, “But on thing I do: Forgetting what is behind and straining toward what is ahead, I press on toward the goal to win the prize for which God has called me heavenward in Christ Jesus.”

If there is one thing Paul does, it is to move forward!  To press on!  To strain toward what is ahead!  He neither wallows in undue celebration of past accomplishments nor does he sink in regrets over past failures and frustrations.  He “forgets what is behind” and moves forward.

Christians are no more designed to remain static in their spiritual life than sharks were designed to hand suspended in the ocean.  We were both designed to move forwards through our elements – in fact we must move forward, or we will sink.  Paul poses a sobering question in Galatians 5:7:

“You were running a good race.  Who cut in on you and kept you from obeying the truth?”

As that letter makes clear, the obstruction of our forward progress brings spiritual disaster.

January always brings an opportunity to choose a new (or a renewed!) direction in life.  This year let’s choose forward.  As our dear friends Joni and Judy are fond of saying, let’s make 2011 be a year of “onwards and upwards!”  We must press on and strain forward!  And, as Peter says, we must

Like sharks, we too must be committed to moving forwards with our mouths open!
Your Pastor,
Bob Bjerkaas